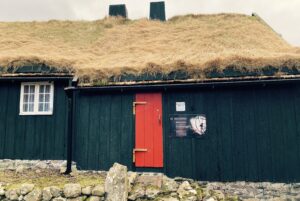 The oldest part of the dwelling house við Brunn is the roykstova, the smoke room with an open hearth, that was built from driftwood in the late 17th century.
The eastern part of the house was built by Gamli Jáki in 1828 from a single log bought at an auction at the so called ship of Saksun, “Saksunarskipið”. This ship had been loaded with Pomeranian pine and the timber was washed ashore at Saksun. It took him 18 hours to tow the log to Nólsoy.
Gamli Jáki added a cowshed, now gone, to the eastern part of the house.
It was told that when the king, Frederik VIII of Denmark, in 1907 did visit Nólsoy, he wanted to see a byre and was invited to at Brunn as this was considered the best byre in the village.

An indication that the house við Brunn formerly being one of the better homes in the village is that when guests arrived in the village they often asked to stay there. Their request was always granted and they were invited into the parlour through the upper door.

The farmers of Brunn owned their land under the system known as “allodial” and upon the death of an owner the land was divided between the inheritors. However, to keep the farm holdings of a reasonable size plots were often bought back from the beneficiaries. Several of the farmers were also skilled craftsmen and the last but one at við Brunn was actually known as bøkjarin, the cooper. Besides the dwelling house with it’s cowshed there were many outhouses as kvarnarhús, hoyggjhús, torvhús, hjallur and neyst, with uses connected to the cultivation of the land, sheep farming, fishing, peat cutting and wildfowling.
The same family has lived at Brunn for more than 300 years.

The museum has a diverse collection of artifacts, each tell it’s own story about the house, the people who lived there, the life of the village and the situation in the world at certain times through out its 300 years story. Certainly worth a visit.

For more information about The Village Museum: http://www.jenskjeld.info/UK_side/brunnahusid.htm

Since 1985 the house vil Brunn has been owned by Nólsoyar Forminnisfelag. It has been renovated with assistance from Føroya Forminnissavn and is open to visitors by appointment or take a guided tour at at 15.00/3PM – just show up at Visit Nólsoy.