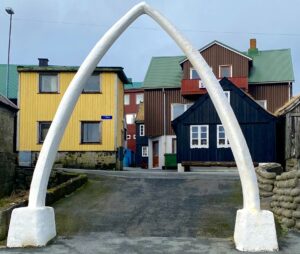 In the small harbour in the village center you can find The Gate of Honour. A newspaper called Føringatíðindi, had on the 5th of September 1895, an article about a large whale, seen close to the Island of Nólsoy. It was about 25 meters long. The people of Nólsoy took possession of the whale after a hard struggle with one Albert Grøn from the whaling station in Gjánoyri and the chief officer of the “Amt”, Buckwald.

Pieces from the backbone were and are still used as stools in homes in Nólsoy, and the jaws were erected as a Gate of Honour by the seaside, when King Frederic VII of Denmark visited in 1907. In 1975 the gate was erected again, this time in Hoygarðinum, where it still stands.