Korndalur (The Dale of Corn)

Korndalur (The Dale of Corn) 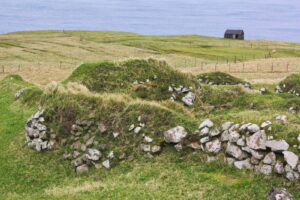 In Korndalur, a few hundred meters southwest of the village, some remarkable ruins are to be found. This is the best preserved medieval village settlement in Faroes except from the one in Kirkjubø.

In the 1920´s a gravel road was built right through the settlement. A runic stone was found at that time, but nobody knows today, what has become of it. In 1946 the ruins were made a conservation area.

The settlement is archaeologically interesting. In 1896 a Danish archaeologist Daniel Bruun visited Nólsoy and wrote an article, where he mentions Korndal. Later, in 1929, he wrote more about Korndal in his book “From the Faroese villages/Fra de færøske bygder” In 1932,Gudmund Hatt, a professor in cultural geography at the University of Copenhagen, visited the settlement. And again in 1934 a Norwegian professor in archaeology, Anton W. Brøgger, visited Nólsoy.

In 1945 the Faroese archaeologist, Sverri Dahl, made a key map of the ruins.

A tale says that a Scottish princess once dwelled in Korndalur.